HABITAT III: Quito in the Centre of the Urban World

Quito is the highest official capital city in the world and the one which is closest to the equator – hence the nearby village ‘La Mitad del Mundo’ (the middle of the world). It was also the place where nearly 50,000 persons convened for the Habitat III Conference organised by the United Nations. Founded by the Spanish in 1534, on the ruins of an Inca city, Quito proudly possesses one of the most extensive and best-preserved historic centres of Spanish America. The historic centre of Quito has one of the largest, least-altered, and best-preserved historic centres in Latin America. Quito, along with Cracow, was the first World Cultural Heritage Sites declared by UNESCO in 1978.

Habitat III is the United Nations Conference on Housing and Sustainable Urban Development, which took take place in Quito, Ecuador, from 17 to 20 October 2016. The Habitat III conference welcomed the participation and contributions of all Member States and relevant stakeholders, including parliamentarians, civil society organisations, regional and local government and municipality representatives, professionals and researchers, academia, foundations, women and youth groups, trade unions, and the private sector, as well as organisations of the United Nations system and intergovernmental organisations. Habitat III is the first United Nations global summit after the adoption of the 2030 Agenda for Sustainable Development and the Sustainable Development Goals. It offered a unique opportunity to discuss the important challenge of how cities, towns, and villages are planned and managed in order to fulfil their role as drivers of sustainable development, and hence shape the implementation of new global development and climate change goals. After the release of the Surabaya Draft of the New Urban Agenda at the third session of the Preparatory Committee for the Habitat III Conference in Surabaya, Indonesia in July 2016, the New Urban Agenda has been agreed on at the Habitat III Informal Intergovernmental Meeting which took place at the United Nations Headquarters in New York from 7 to 10 September 2016, and it was finally adopted in Quito, Ecuador, on 18 October 2016. 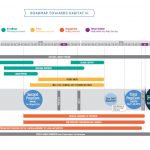 Habitat III is the United Nations Conference on Housing and Sustainable Urban Development that took place in Quito, Ecuador, from 17 to 20 October, 2016. In resolution 66/207 and in line with the bi-decennial cycle (1976, 1996 and 2016), the United Nations General Assembly decided to convene the Habitat III Conference to reinvigorate the global commitment to sustainable urbanisation, to focus on the implementation of the New Urban Agenda, building on the Habitat Agenda of Istanbul in 1996.

The United Nations Human Settlements Programme (UN-Habitat) started in 1976 with the UN Conference on Human Settlements in Vancouver, Canada, at a time when the governments began seriously to perceive the cities under their jurisdictions as ‘emerging futures’ in their own right. Opening the event, Canadian Prime Minister Pierre Elliott Trudeau aptly summarised the worldwide (and ongoing) challenge as follows: “Human settlements are linked so closely to existence itself, represent such a concrete and widespread reality, are so complex and demanding, so laden with questions of rights and desires, with needs and aspirations, so racked with injustices and deficiencies, that the subject cannot be approached with the leisurely detachment of the solitary theoretician.”[1] There were two major outcomes of this path-breaking event. The first was the Vancouver Declaration, which urged both countries and the international community to commit to human settlements policies which would combine spatial planning with elements of economic, social and scientific thinking in order to alleviate the worst conditions of ‘uncontrolled urbanisation’ within a framework of social justice. The second outcome, announced in a UN General Assembly document of December 1977, was the establishment of the United Nations Centre for Human Settlements.

Two decades later, in June 1996, in Istanbul, the Second UN Conference on Human Settlements (Habitat II), further contributed to raising global awareness about urban and human settlements issues. Habitat II was the last in the series of UN global conferences that took place in the 1990s, and marked for the first time in a UN conference the invitation of NGOs and civil society organisations to speak and participate in drafting the recommendations. Behind all the organisation and planning that went into Habitat II were trends and changes that were demanding the world’s attention. Many of these themes were summarised in ‘An Urbanising World: The Global Report on Human Settlements 1996’. As adopted at Istanbul, the Habitat Agenda (241 paragraphs with over 600 recommendations) served as the basis for the UN policy on cities for the next two decades. The main elements of the document were five central objectives:

Although laudable for bringing urban issues to the global policy arena, the Habitat Agenda has been criticised on several grounds[2]. A main criticism is that it contains so many recommendations with no prioritisation, and has a level of generality that makes it difficult for policymakers at any level of government. Another criticism is the Habitat Agenda lacked an effective monitoring mechanism, and as such, there was no systematic way of monitoring the implementation of the agenda. This made it difficult if not impossible to hold governments accountable for failing to implement the recommendations they endorsed. Therefore, the policies that emerge from the Habitat III Conference and the New Urban Agenda must be implementable, universal, sensitive and relevant to the local context. They must be participatory and collaborative. They must be inclusive and recognise the rights of minorities and vulnerable groups. Above all, the policies must be sustainable.